In recent years, various laws and regulations have been introduced at both the national and regional levels. Legal and regulatory restrictions have been rising year after year regarding chemical substances and product areas covered. Legislation covers such areas as reducing power consumption during product use, as well as environmental and health impacts.

Compliance with the RoHS Directive in different countries and regions

The RoHS Directive is an EU law that took effect in July 2006, banning the use of hazardous substances in electrical and electronic equipment. In response to this directive, the Brother Group worked with suppliers to build Brother's unique environmental information system, which is used to investigate, avoid, and manage chemical substances contained in products. In line with the subsequent revision, the Brother Group established a system to create technical documents and Declarations of Conformity (DoC) in 2012. Measures have been taken to cope with more restricted substances added in 2019.
Meanwhile, since 2007, many countries and regions including China and South Korea have introduced laws and regulations that reflect the regulations of the RoHS Directive on hazardous substances contained in electrical and electronic equipment. Many more countries and regions are likely to follow suit. The Brother Group will properly ensure compliance with the laws and regulations in these countries and regions.

Compliance with the REACH Regulation (EU)

REACH is the EU Regulation on Registration, Evaluation, Authorization and Restriction of Chemicals. It came into force in June 2007 for chemical substances that are manufactured or imported. The Brother Group completed the registration of these applicable chemical substances by the deadline in June 2018, and has been continuously checking additional substances requiring registration.
In EU countries, there are various obligations related to the SVHC (Substances of Very High Concern) content in products. The Brother Group improved the environmental information system to facilitate the investigation of SVHC content. In FY2009 (April 1, 2009-March 31, 2010), the Brother Group set up a system for collecting data from suppliers to improve disclosure of information on SVHC content.
In FY2010 (April 1, 2010-March 31, 2011), the Brother Group developed a system for calculating the SVHC content in products and reporting it to the appropriate agency as necessary. Meanwhile, safety data sheets (SDSs) have been translated into EU languages and have been published on the website. In FY2012 (April 1, 2012-March 31, 2013), the SDSs were revised to comply with the revised REACH Regulation.

Compliance with energy-saving regulations in respective countries and regions

The Ecodesign (ErP) Directive (formerly, the EuP Directive, which came into effect in 2005, and was revised in 2009) was set up as a framework that requires the eco-conscious design of energy-related products sold in the EU, to help prevent global warming. The Brother Group uses the data in the environmental information system to calculate life-cycle assessment (LCA) results for the entire product life cycle and facilitate eco-conscious design, thereby ensuring quick compliance with the directive.
Energy-saving technologies for applicable products were developed, and relevant procedures for product environmental impact assessments were updated for "imaging equipment (Lot 4)," "standby and off-mode losses (Lot 6)," "external power supply (Lot 7)," and "networked standby losses of energy using products" (Lot 26) (these are categories into which Brother's products fall) to put in place a framework for compliance. A system is in place to ensure compliance.
Countries and regions outside the EU have increasingly introduced laws and regulations requiring eco-conscious design and set energy conservation standards in respective product areas. The Brother Group has taken quick action to meet these laws and regulations.

Compliance with the WEEE Directive, etc.

The EU Timber Regulation and Australia's Illegal Logging Prohibition Act prohibit placing timber products (including paper products) derived from illegally harvested timber on the market. The regulations also require investigations and assessments of suppliers to prevent mixing of illegally harvested timber. The Brother Group collected information from suppliers about inkjet and thermal paper as well as paper packaging materials including product package boxes, and confirmed the legality of timber used as a raw material. 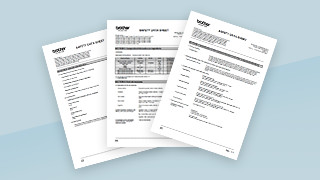